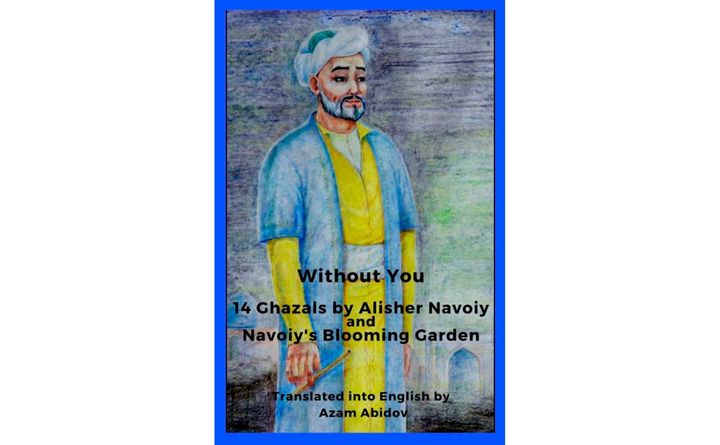 In mid-January, 2021, Without You, a collection of ghazals by Alisher Navoiy and Navoiy’s Blooming Garden by Tursunoy Sodiqova, was published in English at Jasmaya Productions and Publications in Arizona, U.S.A.  The texts have been translated and prepared for publication by Uzbek poet and translator Azam Abidov. The book is dedicated to the 580th anniversary of the birth of great poet and thinker Alisher Navoiy.

“I was astonished and disappointed to learn how little of Alisher Navoiy’s work is available in English. If I could live my life again, I would dedicate it to translating the works written in Chagatai Turkic and related languages that remain practically unknown to English-speakers,” Abigail Britton, the editor of this book, said.

Without You consists of 14 beautiful ghazals by Navoiy, as well as wonderful and meaningful commentaries to his ghazals by famous poet and enlightener Tursunoy Sodiqova. Two talented Uzbek artists, Shavkat Muzaffar and Husan Sodiqov, have contributed to the edition with their splendid illustrations.  The book is also available on Amazon.

“We have done too little to introduce Navoiy not only to the English-speaking world, but also to millions and millions of other nations globally. I am not affiliated with any government-supported organizations or associations in Uzbekistan who are responsible for translation and promotion of the best names in Uzbek literature abroad, and I am doing these works independently and voluntarily. I want those who carry the name of Alisher Navoiy and all responsible institutions to awaken and start dealing with serious international projects,” the translator, Azam Abidov, said.

A.Abidov has extensively worked to introduce Uzbek literature, especially Navoiy, worldwide.  For instance, in 2004, together with an American actress, he presented Navoiy at the Iowa Theater.  In 2011, he compiled the international poetry anthology entitled The Language of the Birds in seven world languages, featuring Navoiy in the first chapter. In 2018, he translated Farhod and Shirin into English.  He has also translated the movie called “Navoiy” from Uzbek into English.  Azam has helped foreign authors and translators such as Janusz Krzyzowski, Gary Dyck, Maria Filipova, Morii Kae, Laura Whitton and many others with translating and popularizing Navoiy in Poland, Canada, Bulgaria, Japan, the U.S. and other countries.

To promote Uzbek culture, literature and art, together with Uzbek compatriots abroad, Azam Abidov dreams of opening Alisher Navoiy Institute in foreign countries in the near future.  He also plans to organize annual International Poetry Festival in Uzbekistan. This year he is going to continue “The International Writer and Artist Residency Program in Uzbekistan” – UzLAB – also an independent initiative. He also runs the “Mitti Ko’prik” Telegram channel and a free English language club for creative people s at the S. Yudakov House Museum, gradually explaining to writers, poets and artists how to open up to international relations and become known abroad. He votes for independence of literature and art in his homeland and calls the country’s leadership, international donors and volunteers to support and join him and his family in establishing the International House of Creativity in a Tashkent neighborhood, where foreign authors would live and translate the best voices of Uzbek literature, including the books of Alisher Navoiy, into world languages, as well as to launch advanced literary and cultural projects.