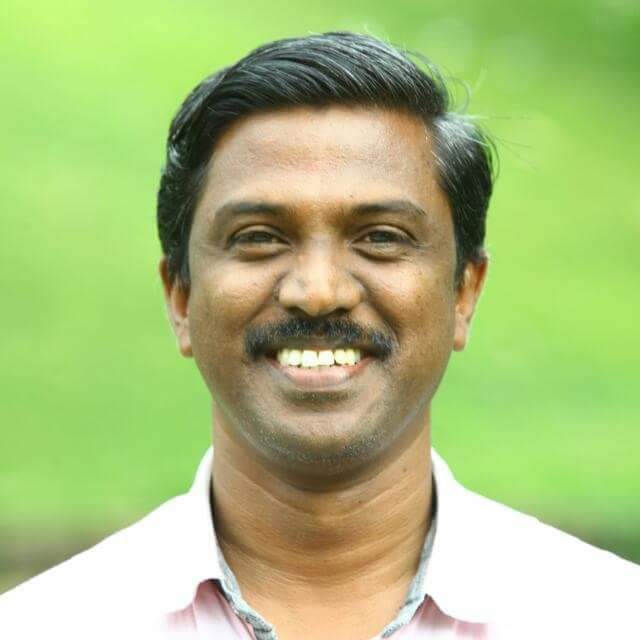 Santhan is a well known Malayalam poet, essayist, film critic and cultural activist born in Kerala, India in 1968. He publishes his poems and articles in all regional magazines of Kerala for the last twenty five years.  He was awarded Asan Prize in the year 2008 for an anthology of poems published by DC Books in the year 2006 titled ‘Riding on a Motorbike in Rain’. He was also awarded Raveendran Nair Memorial award for his outstanding series about life experiences in Kalakaumudi Magazine which is widely popular. His poem “Language of Earth” was awarded ‘Thanima Puraskaram’ in the year 1998. Santhan is also a post graduate in Msc. Psychology and now is working as Technical officer in the department of Radiotherapy, Regional Cancer Centre, Trivandrum.

While Riding The Motorbike in The Rain

The motorbike moved shakily along the road
That was spread on with water-carpets
The rain patted on my shoulder over the rain coat
And muttered its secret, And then moved down.

Without any barrier
It was raining, chatting with everyone
In between lightning shone
And showed me my path.

Apply the brake in heavy rains!
And you have it- the skull’d break
And blood’d flood.

She’d be waiting impatiently for me

because of I’m very very late in the rain.

Upon the window in rain,  the pregnancy’s pleasure
is chatting with the rain.
From the womb a smart infant
is calling the rain to play.
‘I’ll come later with a boat to play with’ – replies the rain.

And before departing, the raindrops
Scattered on the water and uttered laughingly:
‘I’ll visit you in every generation
In order to play with your children.’

Travelling with the moon.

In between the leaves festooned
At 50 km speed the moonlight
The bike stopped
The moon stopped
After filling fuel
The journey resumed
The trailing resumed.

Inside the bar
Inside the glass
Your reflections
Scattered, disappeared
In one gulp

Walking back
You were staggering
Trying to keep
Pace with the bike
Was it to give me company
Or to see me fall ?

Have an overall view of the room
It’s a rectangle
House is a deluge of rectangles,
With no organ rectangular
Man conceived the earth to be a rectangle

Everybody’s earth is a rectangle,
For which all of us fight
We squarely laugh, think and cry

Nothing God created as quadrilateral
We can’t establish a parabola  like Kepler’s
When the mind is locked in a rectangle
How can we make the mind a sky ?

Noon time,  electricity had failed in the apartment
My haste was to prepare the meal
Your fright was about the spreading of the disease
You Sat burning under the stilled ceiling fan

In the Biopsy the speed of light
Like rice in the cooker, whistled off
my sweltering chest.

My Hurry for food – preparation angered you :
‘Let’s eat outside’
‘Why not eat my food once ?’
Hiranyam sat making a cross out of love

Cancer had done everything
What could not have been done further

While returning after a friendly visit
The Mobile phone informed : ‘Geetha died’.

‘The cremation was on a full moon day’
So said Shanmughadas*.
I see you smiling from the sky

As moonlight on the funeral pyre.

The trees of the Cemetery

Foot covered in the ditch, the ‘tree’ is destined to pass the time
Bearing, through out its life, the heat of the funeral pyre

While watching what is left with deep grief
At the funnel pyre, the bone – branches break
With aggressive youthful vigour

It wears leaf – crown, it straightens its spine
In its eyes that have sprouted and exhilarated
There’s the lustre of the cemetery

With a mind that is
Shining and smouldering
Dense, Silent and mysterious

The Language of the Earth

Have you heard the language of the earth,
The language not spoken by trees and valleys ?

Aren’t you afraid of the never – ending
Flow of generations ?
Aren’t you bewildered by the memories of the departed?

Who taught you to conceal everything inside
And laugh like spring,
lie by donning snow
And bathe in the rains ?

Before exploding, you must
Shout off your pains
And rain them on to me

My mind is starting to rotate
So as to invoke the seasons.

In the roar of the engines
The word somersaults
When you speed through
The crowded vehicles
Death ride, curses many
Smashing the heart
The bike’s face
May get wet with blood
Mumbling, lying on its side
The indicator may point towards the sky
On the power of the mind
The rebuilt word
Transcending meters
Moves forward –
The Song
On the bridge of sorrow
Whizzes by
Oh, to inherit a second
Inexperienced by word

To a life lived.

I roamed about seeking
Such rutty, non curricular graffiti
And I too scribbled wherever I could :
Latrines, Urinals and train – lavatories